What is the Open G Tuning?

What is the Open G Tuning?

The Open G Tuning (Spanish Tuning) is a guitar tuning in which the guitar is tuned to DGDGBD instead of the standard tuning EADGBE. This gives you a G major chord if you strike or pluck the guitar without gripping it. The keynote, the G, is on the 5th string.

Open G is one of the most popular open tunings on guitar, not only among blues musicians.

Among other open tunings, this tuning is also very well suited for playing slide-guitar.

After that you get the following tuning:
DGDGBD

Strings, notes, intervals of G and the semitones to tune the guitar from standard tuning to Open G:

The following illustration shows in the position of the twelfth fret which strings remain unchanged with respect to the standard tuning (marked orange) and which strings are retuned (marked grey to red) .

From Standard-Tuning to Open G 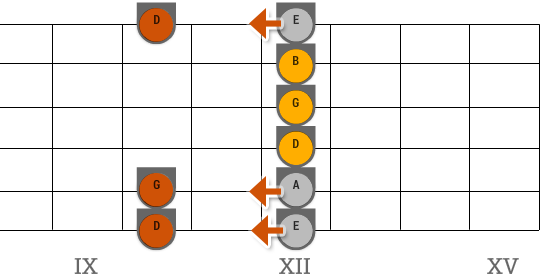 The next picture shows the guitar in open G tuning and the difference to the standard tuning. All notes on the 6th, 5th and 1st strings are tuned 2 semitone steps higher in the Standard-Tuning. 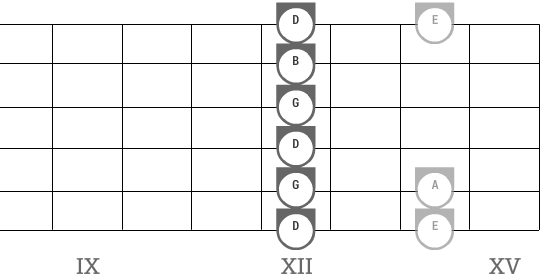 In the following picture you can see a major chord (root on the 5th string) in the Standard-Tuning on the left and the same chord in Open G Tuning on the right. Here the offset between the two guitar tunings becomes very clear.

The keynote of these chords is on the 5th string.

Keith Richards, who very often plays in Open G and thus shaped the sound of many songs of the Rolling Stones with this Open Tuning, uses only 5 strings on his guitar. He omits the low 6th string and thus always has the root in Open G for riffs and chords on the 5th string at the top.

The advantage of Open G compared to other open tunings is that 3 strings on top of each other (4th, 3rd and 2nd string) remain unchanged in relation to the Standard-Tuning. Here you can orientate yourself as usual. The other strings are tuned down 2 half steps. Here you only have to remember the difference (2 frets). In most other open tunings the strings are tuned differently higher or lower. This usually requires more rethinking.

The Open G Tuning is also often used on cigar-box guitars (CBG). These guitars, whose body is made of cigar boxes or other boxes, usually have only 3 or 4 strings. These are often tuned in Open G Tuning, i. e. GDG or GDGB.

Everyone who enriches chords with short fills and riffs especially in solo performances knows the difficulty of playing the chord, changing to the fill and returning to the chord in timing. In Open G Tuning you can play a lot with open strings. A chord can simply continue to sound, for example, if you play riffs, bass lines, etc. in addition. This can produce a very full sound and you can concentrate more on the rhythm and additional tones and riffs.

Many open-tunings, like Open G, are well suited for playing with a slide on the guitar. Since the slide can only be played on one fret at a time, this is of course an enormous advantage if you already get a chord across all strings. You immediately have the right notes and don't have to pay attention to which strings you shouldn't strike.

For those who have never played with a slide before: The slide is held over the fret and not pressed down. In addition, the strings behind the slide, in the direction of the head plate, must be damped with the fingers, otherwise they will chatter. When playing with a bottleneck, as is so often the case in music, "less is more" applies. Especially as a beginner you should not make the mistake of playing too many notes.